I can remember being fascinated by elephants from a pretty young age. As a kid, we were really lucky to go to the Bronx Zoo often on weekends, and explore all over. We learned about birds, crocodiles and alligators, gorillas (LOVE), elephants and more. I specifically remember learning about the difference between Asian elephants and African elephants. I remember being taught that you could tell the difference by looking at the size of their ears. African elephant’s ears are said to look like the shape of Africa and much bigger, while Asian elephant ears that are smaller and look like the shape of India. As a little girl, I never imagined I would have the opportunity to be up close next to them, feeding and bathing them at just 22.

While always fascinated by them, my love for them grew even stronger in college. Becoming best friends/roommates with two girls who really loved elephants definitely rubbed off on me. Our apartments were always covered in all things elephant related, elephant tapestries, elephant lights, elephant pillows, I began to find myself reading more about elephants and falling in love with the animals. Besides all of the dog lovers in my life, I have never seen anyone love an animal as much as Emma loves elephants. Her immense love for these beautiful creatures absolutely influenced me becoming more fascinated by them. Throughout senior year, we talked about how one day we would make it to Elephant Nature Park. We didn’t know how or when, but we knew we would get there one day soon. So, naturally when we decided to take the leap to teach in Thailand, we knew this would be one of the first stops on our list.

What we did not anticipate was the months (!!!) long waiting list to spend a day at Elephant Nature Park. As I write this post in January, the park is already filled up through March! This is amazing, it shows how brilliant the park is, and hopefully that they are receiving the financial means to keep the wonderful place thriving.

A little background on Elephant Nature Park (although you have probably seen videos on Nat Geo and Facebook about it):

We were picked up nice and early from our hostel in a van with others heading to the park. We later learned that the people in our van would be our group for the day, and the man in the passenger seat was our guide. Shortly into the ride, they put on a video talking about the founding of Elephant Nature Park, Lek and the connection between these amazing animals and Lek. The video slowly transitioned to talking about and detailing the kinds of physical and psychological abuse these elephants are forced through all over Thailand and Asia in order to perform in circus’, shows, elephant rides and more. Unbeknownst to travellers, baby elephants are captured shortly after birth and subjected to to “traditional” systematic abuse in order to train them to accept being ridden and performing in shows. These methods of abuse were heartbreaking and I was sitting in the back of the van tears rolling down my cheeks watching how clear it was that these elephants being ridden and forced to perform in shows were incredibly unhappy and truly miserable. It comes as a surprise to many that adult elephants can only support a maximum of around 150 kg on the middle of their back for a maximum of 4 hours a day, where many of the working elephants are forced to carry 50 kg metal racks, plus one or two adults, working for eight or more hours a day. Plus, many of these elephants have little or no access to water, shade, healthy food and more. Although banned in 1989, elephants have also been traditionally used for logging, which has had a detrimental impact on many of the elephants we were able to meet at the park. Elephant tourism is a complex, systematic problem in Thailand, but on the bright side, sanctuaries are growing in popularity which provide the elephants with a healthy space to heal, tourists with the opportunity to still interact with elephants, and the mahouts (traditional elephant caretaker) a way to make money.

About an hour later we made it to the park and were so excited for a day of interacting with elephants. First, we learned about how to be safe around the elephants, and some do’s and don’t for the day. Then we were off to have our first interaction, feeding elephants some bananas off of a platform. I was so nervous!! You can tell from photos as the day we went on, we got more comfortable, but I was so scared to hurt them or touch them or feed them the wrong way! They sure did love their bananas. Fun fact: The elephant trunk is extremely versatile; they use it for breathing, smelling, touching, grasping and producing sound!!

After we fed them we were off to visit more elephants! We were warned very quickly to be cautious of the baby elephants! They love to play and can get a little too rough. We walked around observing the different animals and saw the babies for the first time. Did you know that elephants have the longest pregnancy of any animal– 22 months!!! We watched the elephants walk around with their herds, or their families. Very similar to humans, these elephants pick who they want to spend their time with. Since many of the elephants come to ENP alone, they take the time to bond with different elephants and join a family. Babies also have nannies in addition to their own mothers, or other female elephants that help to take care of them. The herd is also led by a matriarch, or the oldest female elephant in the herd (hmm sounds familiar). A baby elephant can weigh around 200 lbs at birth and will continue to gain 2 or 3 lbs every day until their first birthday! It was really neat to watch them interact with one another, perfectly happy and content. I 100% believe that you can see a difference between happy elephants with their own space and properly taken care of, and the elephants made to perform and serve humans. 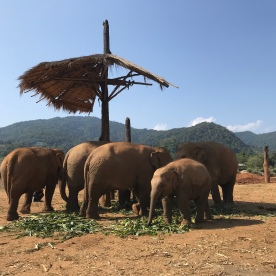 In love with this lil guy 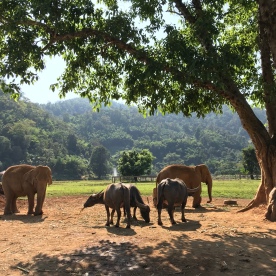 We walked a bit more and finally it was time to meet our first elephant friend! The first elephant we met was an older lady. While I cannot remember her name, she was very gentle with us and had a blanket on to keep her warm!! She was quiet but sweet, and our guide told us she often liked to spend time alone away from her family. Sadly, one of her ears had to be removed due to an infection but they said she was now happy and healthy!

After our morning exploring, we had a delicious vegetarian lunch of noodles, veggies, different soups, and lots more. It was so yummy!! Once we finished lunch we were off to bathe an elephant in the river!! This gal was named Jan Peng, she was around 75!! Our guide told us about the special relationship Jan Peng has with her mahout named Patee. They arrived to ENP together in 2009 after a long life of logging and trekking. During her life trekking, Jan Peng got a hole in her ear from a hook. We learned that Patee has started to give Jan Peng a flower every day for her ear to make something beautiful out of a terrible tragedy. Jan Peng loves her flower, and if Patee does not give her one she gets mad and ignores him! Sassy gal! The deep friendship between these two was clear, and it was really beautiful to watch. She seemed to enjoy her bath, but she definitely enjoyed the bucket of bananas she was given even more! 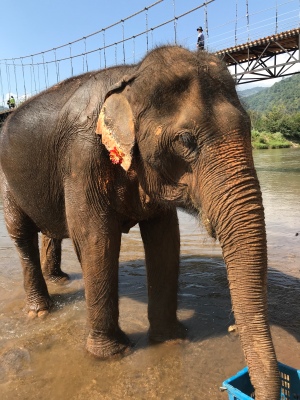 After bathing time, we met a beautiful elephant named Mae Jumpa. Mae Jumpa is older, and has lost several babies during her life. Before she came to ENP, she worked for a trekking and logging company. After losing one of her babies, she became depressed and started to slow down, but her owners wanted her to keep working so began to punish her and she lost eyesight in both eyes. Since coming to Elephant Nature Park, she bonded with the Yindee group and became a nanny for the young elephants. She was very gentle, and is the only blind animal at the park that allows humans to come close and pet her. While it was sad how much this beautiful elephant has gone through, it was beautiful to see how she still has a connection with the staff of the park and the other elephants as well.

As our day came to a close, we continued to walk around the park to see more elephants, water buffalo, dogs and more. We met a few more elephant and were able to enjoy the beautiful, magical place that is Elephant Nature Park. This day was so surreal for both of us, and I felt so fortunate to be able to visit such a unique and wonderful place here in Thailand. I also felt so lucky to be able to share Emma’s dream day with her. Again, always grateful for my bff and our adventures. I am so hoping to head back here with my parents when/if they make it to Chiang Mai and enjoy another beautiful day with these majestic animals. Here’s to elephants and the people who have made it their life’s work to care for and protect them! 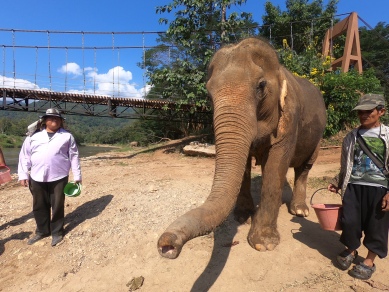 3 thoughts on “A Day with Elephants” 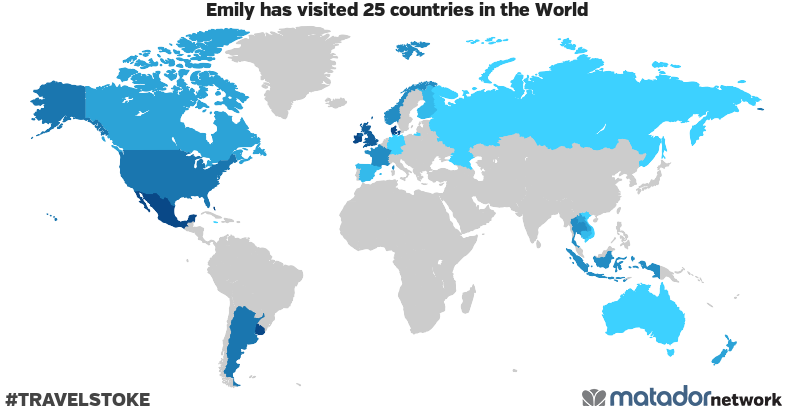